Listen to the Audiobook

I am indebted to the help of many, especially including the following friends and colleagues:

You can also support me by using these links if you choose to purchase either of these related publications: 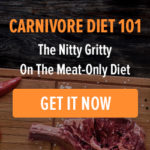 The Carnivore Cookbook by Jessica Haggart:

The diet that the various homo species, including homo sapiens spent most evolutionary time eating was much lower in carbohydrates than what we currently eat, such that we were likely to have been in ketosis the majority of the time. A low carb, ketogenic diet induces many metabolic changes that reduce the burden of today’s most common chronic diseases. However, simply adapting a modern diet to induce ketosis does not otherwise create a diet that resembles our evolutionary heritage. By focusing exclusively or nearly exclusively on human adapted foods the diet becomes ketogenic as an important side effect, but it is not the only important mechanism.